Hit enter to search or ESC to close
NewsPress ReleasesResearch 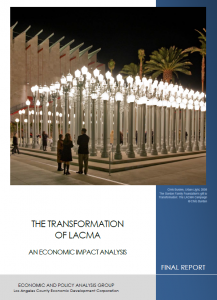 The Los Angeles County Museum of Art (LACMA) commissioned a Los Angeles County Economic Development Corporation (LAEDC) report to study the economic impact of LACMA’s Transformation project, 2007–2013. The report, which describes the economic impact of the construction of the project’s new galleries, public art installations, and other museum facilities, estimates that the Transformation generated economic output in Los Angeles County of more than $477 million, and supported 3,650 jobs with a labor income of $230.2 million. The economic activity is estimated to have generated almost $22 million in state and local taxes and $41.7 million in federal taxes. Further, the annual economic impact from increased attendance and visibility since completion of the project has added $44.1 million, yielding $88.3 million in economic output in Los Angeles County, and 700 additional jobs with an annual labor income of more than $35 million.

The report covers two phases of LACMA’s Transformation. Phase I, completed in 2008, included the Broad Contemporary Art Museum (BCAM), the BP Grand Entrance, and outdoor artworks including Chris Burden’s Urban Light and a palm garden by Robert Irwin. Phase II was completed between 2010 and 2012, and included the Lynda and Stewart Resnick Exhibition Pavilion, a new restaurant and bar, and the installation of Michael Heizer’s Levitated Mass. All together, the Transformation resulted in the doubling of LACMA’s campus, exhibition program, and attendance. A third phase, which will address the east side of the campus, is still in the planning stages.